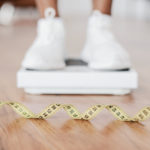 Your Body Mass Index (BMI) can affect chances of pregnancy and increase the risk of having a miscarriage. This is why BMI is considered when determining IVF treatment. Research is continually being done to define whether the negative affects of hormone alterations from obesity is on egg and/or embryo quality, sperm quality or responsiveness of the endometrium.

What BMI is High Risk for Pregnancy?

Women with a high BMI during pregnancy have increased risk to complications including:

Underweight is defined as a BMI less than 19 which is equivalent to a 5 feet 5 inch woman weighing less than 114 pounds. Infertility is more likely to occur in underweight than normal weight women due to ovulation dysfunction. The incidence of early miscarriage is also increased in underweight women most likely due to hormone imbalance.

Men with a high BMI have been found to have poor sperm quality as found in a recent study. Overweight men, as well as those who are considered obese (BMI > 25.0 kg/m2), are more likely to have abnormally low sperm concentrations, sperm count, and total motile sperm than men with normal weight.

Traditional male factor patients (low counts, poor motility and poor morphology) will have poor quality embryos, highlighted after the embryonic genome turns on and the male contribution to the embryo is involved in the growing embryos’ development. These patients are identified and ICSI is the standard protocol. Along with having enough sperm to inseminate, ICSI allows the embryologist to choose a normal (normal as defined by morphometrics, not chromosomal analysis) sperm to introduce to the egg. Men with a high BMI are not diagnosed as “male factor” so ICSI may not be your course of treatment.

Being Overweight During Pregnancy May Lead To Increased Birth Defects

Maintaining a healthy lifestyle by eating right and regular exercise is something we all should do and may help promote fertility. Although, weight alone is not the only factor that…

Read more about Are Bananas Good For Weight Loss?