What to Expect During and After an Egg Retrieval 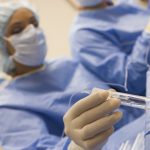 Many patients wonder, “what happens to my eggs during and after their egg retrieval?” The following is a brief outline of what to expect during and after an egg retrieval. During the egg retrieval, the fluid in the follicles, which are small sacs that contain the eggs (like a small grape) is removed with small needle. This fluid is aspirated into a test tube next to the doctor doing the retrieval. The test tube with the fluid and hopefully an egg is handed to our embryologist in the lab.

Under a microscope the embryologists search the fluid and find the eggs. The eggs at this point are surrounded by granulosa cells.The eggs remain in a media for 4-5 hours and then they are inseminated with sperm.

Standard Insemination
There are two ways we inseminate the eggs depending on the indication for the IVF cycle. If there is adequate sperm, a simple standard insemination is performed. In the case of standard insemination the semen sample is spun down to concentrate the motile sperm and approximately 50,000 sperm per egg are pipetted into little wells in the Petri dish.

Intracytoplasmic Injection (ICSI)
The second method to inseminate the eggs is called intracytoplasmic injection (ICSI), which is often used in cases for very low sperm count or need to do preimplantation genetic testing (PGT). In this case, the granulosa cells which surround the egg are removed and the egg is placed under a microscope in a petri dish. A single healthy motile sperm is drawn into a pipette and then the outer shell of the egg is pierced and the single sperm is flushed into the egg.
The egg with the sperm are then placed into the incubator overnight.

What to Expect After the Insemination
The embryos are checked the day after they are inseminated to ascertain which have shown normal fertilization. The embryologist will see two small round dots in the egg if proper fertilization has occurred; these are called pronuclei. If normally fertilized, the egg will have two pro nuclei; these normally fertilized eggs are often called 2 PNs.

After the eggs are reviewed for fertilization, the fertilized eggs are then placed back into the incubator in a media that supports their growth. We place 3-4 fertilized eggs in little tiny wells in the petri dish. The fertilized eggs are then left in the incubator, untouched for 5 days. On the fifth day after insemination the embryos are removed and analyzed for their growth to blastocysts. At this point the embryos are 50-100 cells and have begun to differentiate into the placental tissue and the fetal tissue. In general, only perfect looking blasts or early blasts are prepared to be placed back into the uterus.

We are here to guide you through a personalized treatment plan. If you have questions or would like to schedule a free initial consult, please contact us.