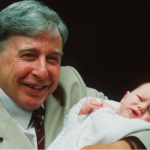 IVF pioneer Sir Robert Edwards died in his sleep on April 10, 2013.  He was 87 years old.  Professor Edwards and Dr. Patrick Steptoe (1913-1988) co-pioneered the first successful IVF cycle resulting in the birth of Louise Brown on July 25, 1978.  Professor Edwards was awarded the Nobel Prize in Physiology or Medicine in 2010 for his work in IVF. The following year, he was knighted by the Queen of England.

Edwards, a British physiologist, was born in Yorkshire England.  In 1955, he completed his doctorate in genetics at Edinburgh University.  In the early 1960s, Edwards studied human fertilization at Cambridge University.  Although fertilization of rabbit eggs had been reported in the 1930s and the first fertilization of a human egg outside the body occurred in 1944, it was not until 1977 that the first successful IVF cycle occurred.

Although today we often take for granted the myriad of details required for a successful IVF cycle, Professor Edwards marveled at the progress made since his original work.  In his 1980 book, A Matter of Life: The Story of a Medical Breakthrough, he chronicled the repeated frustrating efforts before Louise Brown’s birth.  It was in 1968 that Steptoe and Edwards first achieved fertilization of the human egg in their laboratory.  It was not until 1975 that an IVF pregnancy occurred but this resulted in an ectopic pregnancy.  It required two more years and nearly 100 total failed attempts before the November 10, 1977 laparoscopic oocyte retrieval resulted in the successful pregnancy for Lesley Brown.  The millions of IVF babies born since that time are a tribute to Sir Robert Edward’s tenacity and determination to fulfill the lives of infertile couples.