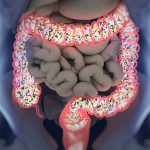 We are often asked if taking a probiotic may help embryo implantation? Recent studies have found that the gut microbiome may hold the key to treatment of some diseases and keeping other human diseases/conditions at bay. Our skin, gastrointestinal tract and reproductive tracts are colonized with bacteria, virus and other organisms that seemingly go bump in the night!

Now, the gut prides itself of maintaining a stable state. The bacterial colonies (effectively, cities) have geographic clarity. City-states present in the small intestine are not welcomed in the large intestine and for the most part, vice versa. It is how stability and normal gut functioning is maintained.

The genital tract however, is more variable in bacterial colonies presence. There is considerable variation in amount of bacteria present and shifts of dominant bacteria present throughout the menstrual cycle. This variation is as normal as is the stability of the gut flora over time.

Hormonal-influences may drive these differences, but may not be the only influencing factor.  Other influencing factors include: menarche, menopause (the two extremes of the spectrum), pregnancy; but also antibiotic therapies as we as surgeries. Bacterial vaginosis occurs when normal bacteria lose their balance and can be hormonally-influenced as well as influenced by other bacteria and exposures. Many a woman can attest to the susceptibility of yeast infections after antibiotics. Reduction of the vaginal microbiome causes the Candida (yeast) population to occupy more real estate.

The predominant species of the genital tract is the Lactobacilli species. It is also seen in the gut.  Common, over-the-counter probiotics sold for colon health contain mostly this species.

The question remains as to whether genital tract flora is important to the implantation event.  The jury remains out, however, it would not be surprising for it to be involved in promotion of embryo implantation.

If you have questions about your fertility or how you can have a healthy nutrition optimal for pregnancy, please contact us for a free initial consultation. We are here to help!