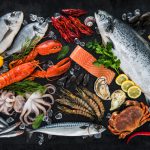 Seafood and pregnancy: Is it safe? The mantra of food consumption and pregnancy has been to be weary of seafood. Certainly, the well-publicized association between increased mercury levels garnered from certain fish and the associated adverse effects on fetal neurodevelopment raises a red flag. These concerns are rooted in a Massachusetts-based study of over 300 mother-child pairs. (Am J Epidemiol. 2008;167(10):1171-1181.) This study evaluated maternal fish intake and maternal serum mercury levels. Those women consuming more than two servings weekly demonstrated higher mercury levels. Interestingly, the children born of this higher-fish consumption subset, were most likely to have higher language and visual motor skills when compared to those children whose mothers consumed no fish at all.

Of the women who consumed >2 weekly servings of fish, there were some who demonstrated elevated mercury levels and some who did not. It was the type of seafood consumed that dictates mercury level, with the longer living fish ingesting more mercury. Shorter-lived fish and crustaceans, in general have lower mercury levels then tilefish or swordfish (some of the biggest offenders). (The FDA updates advisories regularly). This subset (> 2 weekly servings) demonstrated better performance on cognitive tests; however, those women who had elevated mercury levels were linked to poorer test scores. Most importantly, those women with elevated seafood consumption and lower blood mercury levels had children with advance skill and without test score deficit.

From these data, it can be suggested that a seafood-rich diet provides for better cognitive development as long as it is not tainted by pollutants such as mercury. It becomes the consumer who must be discerning in types and amounts of seafood consumed with pregnancy and with breastfeeding.