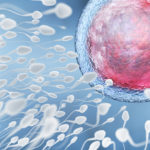 The egg’s voyage is a miraculous journey. Ovulation is a volcano-like eruption on the ovarian surface of the follicle where the egg was matured. Some women experience this normal monthly event as mid-cycle pain on one side or the other depending on which ovary ovulation occurred. In this blog, we hope to provide insight to how pregnancy actually happens.

The Role of the Fallopian Tube in Pregnancy

What Happens to  Sperm During Conception?

Only a few hundred of the millions of sperm deposited actually reach the egg. The sperm, like hounds to the hunt, are thought to be guided to the egg by her alluring secretions acting like homing beacons. Upon finally reaching the egg by those that could follow directions, the sperm (still as yet a team effort) become hyper-activated, beating their tails in frenzy (like a Golden Retriever with a new toy). This passion provides the mechanical energy necessary for sperm to disperse the cumulous oophorus and bind to the zona pellucida.

At this time a chemical is released by the attached sperm in a bombarding-like process called the acrosome reaction. Acrosomal enzymes, like barbarians at the gate, barrage the zona pellucida by making small holes like individual battering rams so that one victorious sperm of the hundreds lucky enough to be there out of the millions who tried can now triumphantly swim through and reach the egg surface. Once the egg recognizes that her defensive wall has been breached, she transforms her zona into an impenetrable barrier preventing additional sperm from entering and is thereby left alone to dance with the now only one intrepid intruder.

On the day of fertilization, still within the comforting confines of the fallopian tube’s ampullary region, the genetic material of the sperm and the genetic material of the egg fuse to form an early embryo called a 2PN for two pronuclei. By the second day following fertilization the embryo develops into a two to four cell embryo and continues its journey down the fallopian tube. These embryonic cells continue to divide producing a ball or cluster of cells by the fifth day after fertilization called a blastocyst.

At this blastocyst stage of development the embryo leaves the fallopian tube and enters into the uterine cavity. Once in the uterine cavity the blastocyst literally hatches from its zona-like shell. After an additional two days of wandering, seeking a safe and secure place to land, the hatched blastocyst finally burrows into the luxurious uterine wall from which, if all goes right, a baby is born nine months later. And this is how pregnancy actually happens!

If you have more questions on how pregnancy actually happens or are having difficulty getting pregnant, please contact us for a free initial consultation. We are here to help.

12 Facts and Fallacies of Infertility

Understanding your personal fertility and the factors that affect your fertility potential are key to a successful pregnancy. In honor of National Infertility Awareness Week (NIAW), here are 12 facts…

Read more about 12 Facts and Fallacies of Infertility
Am I Ovulating?

“Am I ovulating?” This question comes up a lot with patients. Ovulation is the process whereby an egg is released by the ovary. Ovulation usually occurs cyclically giving rise to…

Read more about Am I Ovulating?
Can I Trust a Home Pregnancy Test?

In light of the ongoing COVID-19 pandemic, much of medicine has become virtual. Patients are speaking with their healthcare providers over phone and video on a regular basis. Office visits…

Read more about Can I Trust a Home Pregnancy Test?