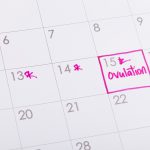 “Am I ovulating?” This question comes up a lot with patients. Ovulation is the process whereby an egg is released by the ovary. Ovulation usually occurs cyclically giving rise to a regular (every 25-35 day) menstrual cycle should pregnancy not occur. Anovulation is the inability to ovulate. Anovulation is thought to be responsible for about 20% of female infertility. Traditionally, Clomiphene citrate (CC) brand name Clomid has been used since the late 1970s to treat anovulation in women who do not ovulate.
Clomid works by binding to estrogen receptors in the ovary fooling the pituitary gland into thinking that there is no estrogen so the pituitary secrets more FSH in an effort to compensate thereby inducing ovulation. Because Clomid is an anti-estrogen it also binds to estrogen receptors elsewhere including the cervix and uterine lining. This can cause a thin endometrium and thick cervical mucus. Thick cervical mucus could impede sperm entry into the uterus and a thin lining could decrease the chance of implantation and potentially give rise to early pregnancy loss.  The anti-estrogen effects of Clomid can also cause hot flashes in some women taking this medication and is also associated with adverse emotional effects.  Fortunately there is a better oral medication available to induce ovulation in anovulatory women. This medication is called Letrezole brand name Femara and works by inhibiting an enzyme called aromatase. Aromatase inhibition decreases both estrogen production in the ovary and peripheral conversion of androgens. Letrezole also decreases locally produced estrogen in the brain which causes increased gonadotropin (FSH followed by LH) secretion and ovulation without the emotional side-effects and other anti-estrogen effects of Clomid.
The pregnancy success rate of ovulation induction (17%-19% per cycle) is still less than conventional IVF (approximately 50%) but the cost of care is lower. Ovulation induction also has a higher chance of multiples than IVF in centers where elective single embryo transfer is the norm. Ovulation induction should be offered in anovulatory women desiring pregnancy as long as there are no other potential factors for infertility involved especially in women under 35 years of age. Even then no more than 3 cycle attempts should be performed as the cost per pregnancy for IVF in a Center of Excellence like the Fertility Centers of New England is much more competitive than prolonged and less effective treatments like ovulation induction. This is important especially in women who ovulate and in those over 35 years of age regardless of whether they ovulate or not.
We can help determine the best path for treatment. Please contact us for an initial consult.