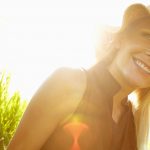 The scientific and lay press have centered much deserved focus lately on how our environment plays an integral part of our health.  These concerns certainly are valid.  Chemicals and their UV-activated by-products demonstrated to be present in personal care products may have an effect on male reproductive potential.  Two of the chemicals in question are benzophenone-2 (BP2) and 4-hydroxybenzophenone (4-OH-BP).  This hypothesis was recently shared in the Am. J. Epidemiology. Can sunblock possibly block fertility?

This study followed over 500 couples from both Michigan and Texas who were trying to become pregnant between 2005-2009.  Men with higher levels of BP-2 and a 30% lower chance of impregnating their partners then BP-2 depleted men.  Additionally, in couples where the man had higher levels of absorbed 4-OH-BP, a delay to pregnancy was noted.

Oxybenzone acts like an estrogen-like compound and it is this mimic of natural estrogen components that may have an effect on fertility.

Although the names of the chemicals and their changing structure are complex, the principle is clear – we truly are what we eat (and breathe and are exposed.)  All of these seemingly small influences can have a greater effect on the balance and on reproduction.

To be clear, these data do not shun sunblock but simple recommend a non- oxybenzone sunblock for all.