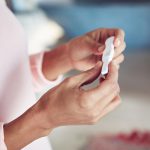 Bleeding inside the uterus is often seen on ultrasound monitoring. This bleed occurs adjacent or beneath the placenta and is called a subchorionic hematoma representing a collection of blood similar to a bruise. Sometimes a subchorionic hematoma may be associated with uterine cramping and in the presence of no fetal pole being seen on ultrasound does represent an ominous finding. The causes of subchorionic hematoma are not will understood but may result from trauma or related to the way the embryo implants into the uterus. A recent study presented at this year’s meeting of the International Society of Ultrasound in Obstetrics and Gynecology evaluated 1,115 women in early pregnancy experiencing vaginal bleeding and found a subchorionic hematoma in 142 or 13% of those scanned. No statistical significant association was found between the presence of subchorionic beeding and subsequent miscarriage especially in the presence of seeing the fetal heart beat. This study should provide reassurance and hopefully help alleviate some of the anxiety caused by experiencing vaginal bleeding in early pregnancy.

If you have more questions, please contact us here!

More information on early bleeding during pregnancy or miscarriage:
Implantation Bleeding or Miscarriage