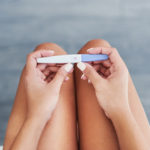 In the United States, approximately 1.5% of all births involve the use of assisted reproductive technologies or in vitro fertilization (IVF). Bleeding during pregnancy (first trimester) is somewhat common and understandably stressful.

Bleeding During Early Pregnancy: When Should You Worry?

Bleeding can occur for a number of different reasons, one of which is called a subchorionic hematoma (SCH). A SCH is a bleed adjacent to the pregnancy sac. For reasons that we do not understand, SCHs seem to occur more frequently in IVF pregnancies versus naturally conceived pregnancies.

Every pregnancy carries with it a risk of miscarriage. The risk of loss exists throughout the entire pregnancy, but this risk decreases significantly after the first trimester. Recurrent episodes of bleeding are very common in the setting of a subchorionic hematoma, but most pregnancies will still progress successfully in this clinical scenario.

Unfortunately, when a patient experiences early bleeding, the outcome of the pregnancy is out of her control and out of her doctor’s control. There is virtually nothing that can be done to save or rescue a pregnancy if it is not destined to be healthy. Fortunately, the prognosis remains good for many patients. Often, the bleeding will resolve on its own, and the pregnancy will progress successfully.

Getting the Help and Support You Need

If you are experiencing bleeding during early pregnancy or miscarriage, Fertility Centers of New England is here to help. Contact us today to set up your first consultation with our team of trusted, caring fertility doctors. Initial consultations are free for those without fertility insurance.

Miscarriage is a very common occurrence.  At least 15-25% of pregnancies will end in miscarriage, and as a woman ages, this percentage increases.  Many women are not aware of this…

Read more about Recurrent Miscarriages Can Be Prevented
What Are The Chances of Having a Miscarriage?

When a baby is desired, success is expected immediately. However, the natural chance of becoming successfully pregnant per month of attempting pregnancy called fecundity, is only 1 in 5 or…

Read more about What Are The Chances of Having a Miscarriage?