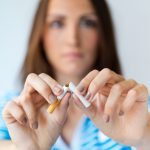 Mr. Mackay, the school guidance counselor on the adult cartoon series, “SOUTH PARK”, knows the inimical effects of smoking. Smoking and especially nicotine also affects fertility in both women and men. The degree to which nicotine affects fertility is so pronounced that third party payers that offer fertility coverage such as Blue Cross Blue Shield, Harvard Community Health Plan and Tufts Health Plan do not cover fertility care to smokers and people who use nicotine products. In fact, they mandate that blood levels of cotinine, a metabolic by-product of nicotine, be negative or fertility coverage otherwise offered will be denied.

There are cost-effective reasons for insurance companies to deny fertility coverage to people who smoke or other nicotine containing products. To begin with, women who smoke take longer to conceive than women who do not smoke. One study found that tobacco consumption affects uterine receptivity (embryo implantation) and even comparatively low levels of nicotine can have a significant impact on a woman’s fertility. The success of in vitro fertilization (IVF) can be reduced by as much as 50% compared to women having IVF who have never smoked. Additional data from IVF studies have shown that both egg quality and embryo quality are negatively affected by nicotine and its metabolic by-products. Ectopic pregnancies are also more common in smokers as are miscarriages, premature births, still births, low birth weight babies and sudden infant death syndrome. A growing body of evidence suggests that maternal smoking may have a negative impact on the fertility of both female and male offspring because smoking during pregnancy reduces the number of the cells that form eggs in females and ultimately sperm in males.

Cigarette smoking negatively affects male fertility starting in utero. Men whose mother smoked during pregnancy are at risk of having smaller testes, lower mean sperm concentration, and lower sperm counts.  Men who smoke have lower sperm counts, lower sperm motility, and more morphologically abnormal sperm than men who do not smoke. Even light smoking is associated with reduced male fertility. There is also evidence that smoking is associated with male sexual impotence increasing with the number of cigarettes smoked per day.