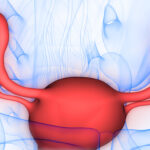 The most common congenital malformation of the uterus that has been associated with recurrent pregnancy loss is a septate uterus or intrauterine septum. This anomaly occurs in the early female fetus due to incomplete reabsorption of the septum formed where the two uterine horns fused during development. Embryologically the uterus and fallopian tubes called the mullerian system start out as two separate horn shaped structures near the kidneys and migrate down into the fetal female pelvis where they join. The area where they joined is a septum made of fibrous tissue that extends from the top of the uterus into the upper third of the vagina.

Initially after mullerian fusion there is a large septum in all female fetuses. In some women reabsorption of this septum is not complete. In the majority of such uncompleted cases there is a fibrous band extending a centimeter or more into the intrauterine cavity. This anomaly is called a septate uterus which is different from a true bicornuate (two horned) uterus that occurs when there is incomplete mullerian fusion. A true bicornuate uterus is not traditionally associated with miscarriages but is associated with preterm labor; while a septate uterus is not associated with preterm labor but is associated with miscarriage and also in some cases infertility. The thought as to how implantation difficulty leading to either infertility or miscarriage may occur involves an inadequate blood supply to this septum predisposing to loss.

Another congenital uterine abnormality associated with recurrent pregnancy loss and possibly infertility is an abnormal shaped uterus caused by exposure of the female fetus to Diethylstilbesterol or DES which may cause a “T-shape” uterus in women whose mothers took this drug during pregnancy. The uterus in exposed women is also generally smaller (hypoplastic) than normal and is associated with uterine cervical abnormalities that may increase the chance for cervical cancer. Thankfully, this drug was taken off the market in 1973 and thus no longer prescribed.

Acquired anatomical associations with recurrent pregnancy loss are lesions that have formed over time. These abnormalities involve lesions that either increase or decrease the configuration of the intrauterine cavity. Such lesions include uterine polyps, uterine fibroids, intrauterine adhesions (scars), and perhaps adenomyosis which is a condition where the uterine lining (endometrium) grows into the uterine musculature. These conditions are typically associated with heavier or irregular menstrual bleeding, unbearable cramping, or changes in bladder function.

Our physicians are experts in diagnosing fertility problems, and guiding our patients through the process with care and expertise. If you have more questions on uterine causes of recurrent pregnancy loss, please contact us. We are here to help.