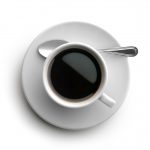 Some studies have found a link between daily caffeine consumption and reproductive difficulty. A recent NIH sponsored study from the University of Ohio reported that both men and women who drink more than two cups a day of caffeinated coffee, soda, or energy drinks before they get pregnant are nearly twice as likely to suffer a miscarriage.  Interestingly male preconception consumption of caffeinated beverages was just as strongly associated with pregnancy loss as females. Investigators also found that women who took multivitamins before they got pregnant and early in pregnancy wee 50% less likely to experience a miscarriage. Drinking up to two 8-ounce cups of coffee containing 200 to 300 milligrams (mgs) of caffeine (weak brew) is generally considered safe while trying to conceive. If you drink more than that it is prudent to cut down.