The Type of Male Underwear May Affect Sperm Function 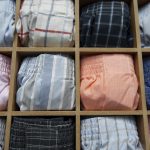 The type of male underwear may affect sperm function. A recent study published in Human Reproduction (Sept. 2018) reported that of 656 men attending a fertility center, those who reported wearing boxers had higher sperm concentration and total sperm count and lower FSH levels than men who wore tight fitting underwear.  Wearing tight underwear may impair sperm production which could cause a compensatory increase in FSH secretion. This may be due to higher scrotal temperatures caused by wearing tight fitting underwear.

The Impact of Male Partners Who Smoke and Pregnancy
Exercise and Male Fertility: Did They Correct for Spandex?
Male Fertility