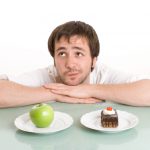 It’s well known that the mother’s health is vital to her baby’s development because one’s fetal environment is an important predictor of their adult health. What is less known, is that the preconception “environment” can also play a role in fetal health.  In other words, actions before actual conception can affect your baby, therefore making daddy and his health also important.

Studies have shown that men with high omega 6 to omega 3 fatty acids ratios are more likely to have low sperm counts, reduced sperm motility and have a higher chance of being infertile. Humans evolved with a diet containing a 1 to 1 ratio of omega 6 to omega 3 but today’s typical western diet contains 15:1 ratio. Omega 6 is a necessary part of the diet but it’s the imbalance that is detrimental and excess intake has been associated with numerous inflammatory diseases such as diabetes, and prostate cancer. Obese men have been found to be 3.5 times more likely to have oligospermia (low sperm numbers) than those with a normal BMI. They also have an increased rate of sperm DNA damage. When it’s all said and done, in most cases, ICSI (intra-cytoplasmic sperm injection) can overcome poor sperm quality parameters; so the question becomes, if ICSI can still permit pregnancy with poor sperm parameters, does Dad’s health really matter?

YES!! Since the placenta (also known as trophectoderm) cells are largely derived from the male, preconception paternal nutrition likely plays an underappreciated role in placental health during pregnancy. Studies have also shown the paternal contribution to pregnancy extends beyond genetic material and both parents play a significant role in determining pregnancy success. Although the male does not carry the child, his smoking habits have been connected with higher miscarriage rates, pre-eclampsia, placental abruption and pre-term births. Furthermore, by smoking, Dad can also contribute to an increase chance of his child developing cancer.

At the end of the day, what can Dad do to provide the best possible life for his child? It’s not enough to eat a cheeseburger everyday as long as you take the right supplements, it’s the lifestyle that counts.  First, avoid predator  (such as shark, swordfish and tilefish) and farmed fish. The lower the food chain the less toxins the fish contain (crab, haddock, salmon and trout are especially low in mercury). Take 30-60 mg of Co-enzymeQ10 and ~1200 mg of Omega 3 (recommended doses will vary). It’s also important to take these supplements with fatty foods (for example don’t take them with a fat free yogurt) this will increase absorption.

There are also about a dozen male fertility supplements available to purchase. These supplements have the necessary amino acids, vitamins and trace elements that are required in a healthy lifestyle. They also include ingredients such as Selenium, which is required for healthy spermatozoa, Folic Acid, which contributes to healthy DNA and L-carnitine, an nutrient that plays a important role in the generation, growth and life of healthy, motile sperm cells. The Top three supplements are fertilsan M, FertilAid, and Proxeed Plus. Fertilsan has the most complete formula with the highest concentrations of Arginine and Folic acid. It is also the only supplement to include a pharmaceutical grade of carnipuretm carnitine, which they have patented. FertilAid is the top selling supplement in the U.S and has been scientifically proven to improve overall reproductive wellness when incorporated with a healthy diet and lifestyle. The third, Proxeed Plus, includes an antioxidant complex for protecting sperm from free radical damage as well as additional nutrients for enhancing sperm formation and maturation.

So dads, next time you’re deciding what to eat on the menu or how trying to quit smoking is too hard, remember your “daddy duties” have already begun.

If you have questions about your fertility and would like to learn more, contact us today for a free initial consult!