Past Pesticides and Endometriosis Risk 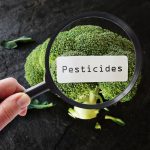 Investigators from the Pacific Northwest reported online in Environmental Health Perspectives that exposure to organochlorine pesticides was associated with the development of endometriosis. Is there any connection to past pesticides and endometriosis risk?  In a case control study of 248 women with surgically confirmed endometriosis and 538 healthy control women, serum samples were obtained so that levels of mirex and beta Hexachlorocyclohexane (beta HCH) could be measured. Women with endometriosis were found to have higher levels of mirex and beta HCG than normal controls. Mirex is a chlorinated hydrocarbon that was used as an insecticide against fire ants and later banned because of its impact on the environment. Beta HCH is an organochlorine isomer of Hexachlorocyclohexane found as a by product in the production of the insecticide lindane used primarily on cotton plants. Both of these pesticides were widely used in the 1960s and 1970s. Although banned more than 30 years ago, trace amounts of both mirex and beta HCH can still be found in water and soil.

America’s great author, William Faulkner said in ‘Requiem for a Nun,’ “The past is not dead. It is not even past.” The same unfortunately can be said for these environmental pollutants as the study’s lead author was quoted in a recent interview, “Persistent environmental chemicals even those used in the past may affect the health of the current generation of reproductive age women.”