Louise Brown's Birthday and the Evolution of IVF 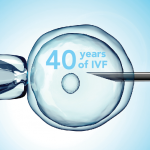 On July 25, Louise Joy Brown, the first baby born utilizing in vitro fertilization (IVF), turns 40. Louise’s parents, John and Lesley Brown, were referred to Patrick Steptoe, a British Obstetrician and Gynecologist who was an early pioneer of laparoscopic surgery for infertility. Steptoe had partnered in 1966 with Robert Edwards, an English biologist and physiologist with a special interest in human embryology. In 1969 Edwards was the first to human fertilization in vitro. He won the Nobel Prize in Medicine in 2010 for his pioneering efforts in human embryology, which enabled the clinical development of IVF.

The innovations and seemingly miraculous accomplishments of Steptoe and Edwards were built on the work of many men and women going back to the 1890s through the 1930s, 40s, and 50s. Others in Australia, Europe, and the United States were working on IVF contemporaneously with the Steptoe and Edwards Team. Howard and Georgeanna Seagar Jones achieved the first baby born in the United States in 1981 using ovulation induction with hMG, which is a medication with hormones to stimulate your ovaries. This procedure allowed the recruitment of more than one egg, unlike the natural cycles being monitored by Steptoe and Edwards.

In the early 1980s there were very few IVF Centers in the world; today there are thousands with over 450 in the U.S. alone. Pregnancy success rates resulting in a baby have gone from single digits in the early days to well over fifty percent today. Furthermore, multiple pregnancy rates have decreased from double digit numbers to less than five percent without significantly compromising the live birth rate.
To read the full story about Louise Brown’s birthday and the evolution of IVF, click here.
Published in Medium and written by owner and CEO of the Fertility Centers of New England, Dr. Joseph Hill.