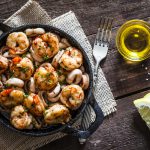 Studies suggest that eating more seafood is associated with a higher chance of becoming pregnant per cycle attempt and a higher frequency of intercourse.

Eight or more seafood servings per cycle, or about two servings per week not only improved various biological markers including sperm parameters, ovulation dynamics, embryo quality, and implantation, but also increased the number of times couples had intercourse. Researchers have found that 92% of couples who ate seafood twice a week were pregnant at the end of the year, compared to 79% among couples consuming less seafood. The daily odds of sexual intercourse were 39% higher when both partners consumed seafood on the same day, supporting the popular theory that seafood is an aphrodisiac. In the United States, the majority of fish consumed are not predatory fish. Predatory fish such as Sword-Fish, Mackerel and Sharks should not be included in a fertility diet due to the higher levels of environmental toxicants such as organochlorines, dioxins and mercury contained in these apex predators.

For more ways to increase your chances of becoming pregnant through what you eat, read the following blog posts:
Mediterranean Diet May Improve IVF Success Rates
Women Who Consume High Amounts Of Fast Food May Take Longer To Conceive
Cholesterol Levels May Play A Part In Fertility