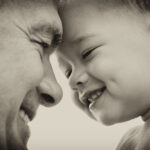 Men’s bodies are constantly making new sperm cells but can advanced paternal age increase chromosomally abnormal embryos? In a large study published in the July 2020 journal Fertility and Sterility, no association of increased chromosomal abnormalities in embryos from men with advanced age was found. In this study of 3118 embryos derived from 407 male patients and women less than 34 years of age, there was no difference in the percentage of embryos with chromosomal abnormalities in men less than 40 years old, 40 to 49 years old, and 50 years or older.

As has been shown in previous studies, the men in the over 50 group had slightly lower sperm volume and motility but an increased sperm count; the fertilization rate was found to be very slightly lower in the older men, but there was no difference in embryo growth to the blastocyst stage among the groups.

Affects of Female Age on Embryos

Contact Us
Our physicians are experts in diagnosing fertility problems, and guiding our patients through the process with care and expertise. If you have more questions on advanced paternal age or male fertility, please contact us. We are here to help.