Anti-Mullerian Hormone as a Marker of Ovarian Reserve

Anti-mullerian hormone (AMH), also known as mullerian inhibiting substance, is a regulatory protein found in the ovary.  It is synthesized in the granulosa cells of antral follicles (see drawing below).  AMH is thought to play a role in coordinating follicular development within the ovary; there is a “give and take” between follicle stimulating hormone (FSH) stimulating the follicle and AMH decreasing the early follicles response to FSH. 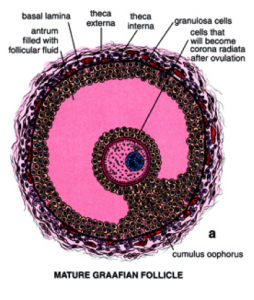 AMH has been found to be a useful marker of ovarian reserve.  It is essentially cycle day independent.  AMH has been used to compare patients’ age-specific ovarian reserve relative to other patients of similar age.  The graph below demonstrates the decline in mean AMH with increasing age. 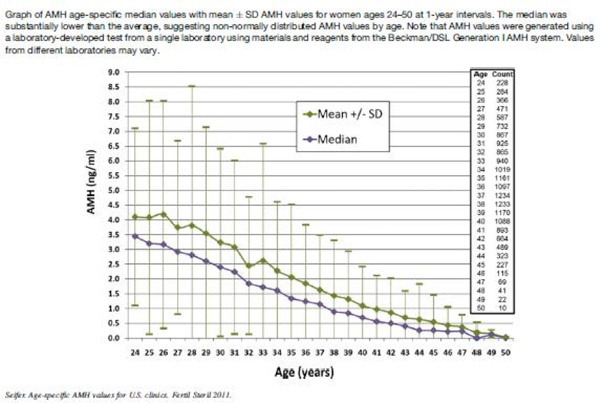 AMH has been used to predict ovarian response to IVF stimulation, including medications required and number of eggs or oocytes.  In one study of 73 women with decreased ovarian reserve (previously predicted by an elevated FSH level > 10), AMH levels further predicted IVF outcomes.  Women with an AMH > 0.6 ng/mL, had twice the number of oocytes and embryos.  Their cycle cancellation rate was 14% compared to 41% in those patients with lower AMH levels and pregnancy rates were twice as high in the higher AMH group.  In an English study of 135 women doing their first IVF cycle, AMH and antral follicle counts (AFC) were used to accurately estimate the number of oocytes retrieved.  A linear regression analysis resulted in the equation:  # of oocytes = -1.476 + (0.594 x AFC) + (2.378 X AMH).  With this equation, higher AMH levels obviously resulted in greater number of oocytes retrieved.
As shown in the box plots below from a 2009 study, AMH and AFC are better predictors of oocyte response than FSH levels alone.  This is particularly true in patients with polycystic ovaries (PCO).

At the Fertility Centers of New England, AMH levels are routinely checked as part of a patient’s initial evaluation.  With this information, a patient’s treatment can be independently adjusted to optimize treatment response.