Sperm morphology refers to the size and shape of the sperm. The percent of normal sperm in an ejaculate has been correlated with its ability to fertilize eggs. A sample is considered “normal” if it has ≥ 14% normal forms, while samples with lower than 4% normal morphology are considered “abnormal.”
Sperm are classified into several different groups as shown below: normal (whole sperm), large sperm, small sperm, duplicated and amorphous heads, duplicated tails, elongated (tapering), and sperm with a normal head but with a tail, neck, or midpiece defect or the presence of a cytoplasmic droplet. 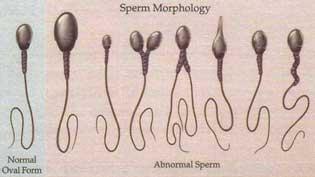 Normal sperm must have an oval form with smooth contour, acrosomal cap encompassing 40-70% of the head, no abnormalities of midpiece or tail and no cytoplasmic vacuoles.

An increased percentage of morphologically normal appearing sperm has been correlated with increased fertilization potential, while decreased normal forms are associated with a decreased potential to fertilize eggs in vitro. Low sperm morphology has been associated with smoking, testicular defects, and high fever. In patients with less than 4% normal sperm morphology, IVF with the injection of the sperm into the egg known as intracytoplasmic sperm injection or ICSI may overcome this issue.