Volume – The average volume of an ejaculate is between 1.5-5.0 milliliters (ml). Lower volumes are sometimes associated with blockage and/or retrograde ejaculation (ejaculation that refluxes into the bladder).

Concentration – The normal sperm concentration is ≥20 million sperm per milliliter of semen. Decreased counts can indicate abnormal or impaired spermatogenesis or blockage while increased counts are often found in cases of prolonged abstinence. 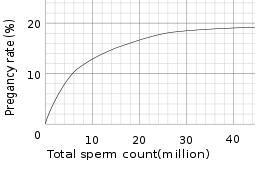 While it is possible to achieve pregnancy in couples below normal total sperm counts, additional procedures such as ICSI (Intra-Cytoplasmic Sperm Injection), where a single sperm is injected into the egg to facilitate fertilization, may be necessary.