What Happens When a Sperm Meets an Egg 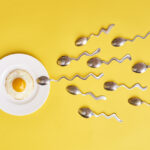 While women typically release only a single egg each month, men release millions of sperm during ejaculation with only one lucky winner fertilizing the egg. What happens when a sperm meets an egg?

What Happens to the Sperm During Pregnancy?

Following ejaculation, sperm are deposited as a coagulum of secretions from not only the testicles, where sperm are made, but also from the seminal vesicles, prostate, and other accessory glands within the male reproductive tract. In the vagina this coagulum takes some minutes to liquefy so that sperm can begin their arduous journey through the female reproductive tract in search of the elusive egg.

While some sperm may swim quite fast, appearing in the upper female reproductive tract (fallopian tubes also called oviducts) within minutes, the majority of ejaculated sperm are destined to die an inglorious death within the acidic secretions of the vagina. Although, at the time of ovulation (when the egg is released from her confines within the ovary), cervical secretions increase in an attempt to neutralize the otherwise caustic (to sperm) environment.

Some sperm (the lucky ones) enter this rather neutral cervical mucus and hide in the cervical crevices where they may be safely stored and remain alive for two or three days. It is here in the sanctuary of the cervical crypts that sperm acquire their ability to fertilize in a process called capacitation.

Is it Necessary to Have Sex Every Day During Ovulation to Get Pregnant?

During this respite, sperm are released over time and aggressively swim up into the uterus, through the tubal openings called ostia and, into the fallopian tubes. This is why it is not necessary to have intercourse every day (at least to get pregnant), even though the egg is only able to be fertilized for about 24 hours.

At Fertility Centers of New England, many patients come to us because they are struggling with infertility and/or miscarriages. We are proud to have helped thousands of patients realize their dream of becoming a parent and are here to answer your questions from what happens when a sperm meets an egg to how can you increase your chances of pregnancy. We are here for you!

If you have more questions, please contact us to schedule your free initial consultation.