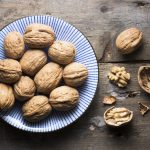 Obesity continues to be an important factor in pregnancy loss and infertility. Overeating and poor food choices are the primary reasons for weight gain. There is a lot of discussion on how walnuts can control appetite. How can a nut have such power? Walnuts are thought to discourage overeating by promoting feelings of fullness.

A recent study published in ‘Diabetes, Obesity and Metabolism,’ used functional magnetic resonance imaging (fMRI) to observe how eating walnuts affects brain activity. In a controlled environment volunteers consumed daily smoothies containing 48 grams of walnuts (the serving recommended by the American Diabetes Association dietary guidelines) followed later by a walnut-free smoothie that was nutritionally comparable and flavored to the same taste as the walnut containing smoothie. Participants reported feeling less hungry during the week they consumed walnut containing smoothies than during the week they were given the placebo smoothies. When study participants were shown pictures of nutritionally desirable foods, fMRI imaging revealed increased activity in a part of the brain called the right insula after participants consumed the five day walnut rich diet compared to when they had not.

The insula area of the brain is involved in cognitive control meaning that participants were paying more attention to food choices and selecting less desirable or healthier options over the highly desirable or less healthy options. Walnuts may activate the brain ceners involved in appetite control. If you have questions on how we can help, please contact us! We are here for you.