Fibroids, also known as leiomyoma, are benign smooth muscle tumors within the uterus.  These fibroids can be positioned on the outside of the uterus (subserosal), within the uterine muscle (intramural) or within the endometrial cavity (submucosal).  Previous blogs have discussed the impact of fibroids on reproductive function.  In those patients with submucosal fibroids, how does the physician know which patient is a good candidate for surgical removal of the fibroid through a hysteroscope (a small telescope placed through the cervix into the uterine cavity)?  A scoring system known as STEP has been designed to aid in selecting the right surgical treatment.

STEP is an acronym for Size, Topography, Extension of the base of the fibroid in relation to the uterine wall, and Penetration into the uterine muscle (myometrium).

At first glance, the scoring system may be cumbersome but with experience it becomes routine.  It is summarized in the table below.  The higher the score, the less likely the patient would be a good candidate for hysteroscopic resection of the fibroid.  Higher scoring patients may require a small incision within the abdomen (mini-laparotomy) to enable removal of the fibroid. 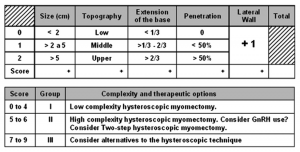 In the example pictured below, the fibroid can be seen in the left picture and obscuring the tubal opening (ostium) within the uterine cavity.  The contralateral normal tubal ostium is seen on the picture to the right.  The STEP score for this patient – – Size = 2 cm (1 point); Topography = Upper part of uterus (2 points); Extension of the base – < 1/3 (0 points); Penetration = almost entirely within the uterus (0 points) for a total score of 3 points.  This is considered a low complexity procedure which could easily be performed with the hysteroscope.

In the patient with a fibroid penetrating into the uterine cavity but with the majority of the fibroid within the uterine wall, a hysteroscopic resection would merely be removing the tip of the iceberg.  The STEP score is this patient would be 8, prompting a recommendation to proceed with an abdominal opening for fibroid removal. 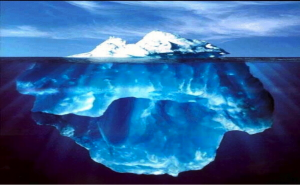 If you have fibroids, contact us with your questions!