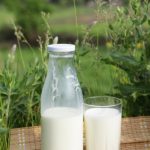 The consumption of raw milk (unpasteurized) and raw milk products (cheeses and sour cream, frozen desserts) from cows, goats and sheep is often believed to be a healthy alternative to those concerned with food commercialization. However, there are no proven nutritional advantages of raw milk compared to pasteurized milk. In fact many species of harmful bacteria have been found in unpasteurized milk products including Listeria, Salmonella, Escherichia coli and Cryptosporidium accounting for a significant proportion (17%) of food borne illnesses in the United States. The sale of raw milk is illegal in 20 States. Although, it is legal to sell raw milk in all of the New England States especially at farm stands.

In a new policy statement , the American Academy of Pediatrics has announced a raw milk warning that advised children, infants and pregnant women not to consume any raw milk or raw milk products from cows, goats and sheep. This warning should also extend to women contemplating or attempting pregnancy including women undergoing therapy for infertility since there is no reason to risk infection or damage to what would otherwise hopefully be a healthy pregnancy.