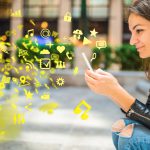 Investigators at Weil Cornell Medical College reported in this month’s journal, ‘Obstetrics and Gynecology’ that most Fertility Apps miscalculate the fertile window defined as the best time for couples to attempt conception. The top 33 most popular free apps available on both Android and iOS platforms were selected and tested as well as the top 20 websites using a search for ovulation calendar or, “fertility calendar.” These fertility websites and smartphone apps varied in how they calculated a woman’s fertile window and most got it wrong. Only one website and three apps predicted the same fertile window.

Approximately 79% of apps and 75% of websites included days after ovulation as part of the fertile window, even though conception is unlikely to occur during that part of a woman’s cycle. Some gave drastically different results with the fertile window starting as early as cycle day 4 in some calendars and some giving as late as cycle day 21.

This study demonstrates that web-based and app-based resources intended to help couples identify the fertile window are usually inaccurate and with the inherent variation in actual cycles the predicted fertile window may be even more inaccurate. Couples should be aware that most fertility apps are inaccurate in predicting timing of intercourse for conception. Couples having difficulty conceiving should see a Board Certified, Reproductive Endocrinology and Infertility Specialist. Contact us for a free initial consult.