Marijuana While Pregnant Can Increase Risk of Autism Spectrum Disorder 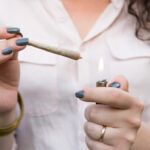 In the largest study of its kind, the use of marijuana while pregnant can increase risk of autism spectrum disorder in the offspring by an astounding 50%. This study which was published in Nature Medicine reviewed the data from all births in Ontario that occurred from 2007 to 2012. Over 500,000 women and their children were studied. The risk of having a child with autism was shown to be 1.5 times higher than in women who did not use marijuana. The study also pointed to an increased risk of learning disabilities and attention deficit hyperactivity disorder in the offspring of women who used Cannabis. These findings showed a trend to increased risks but was not statistically significant.

Is it Safe to Use Marijuana During Pregnancy?

Certainly this is worrisome information as the use of cannabis during pregnancy in the U.S. and Canada has increased above the 5% reported use of cannabis in the years prior to it being legalized. In addition to recreational use, Cannabis is prescribed for medicinal use as well. The American College of Obstetricians and Gynecologists has put out a statement that, “Pregnant women or women contemplating pregnancy should be encouraged to discontinue use of marijuana for medicinal purposes in favor of an alternative therapy for which there are better pregnancy-specific safety data.”

At Fertility Centers of New England, our goal is to optimize all aspects of a patient’s overall health in order to have the best possible chance of conceiving. If you have more questions on how marijuana while pregnant can increase risk of Autism Spectrum disorder, please contact us!