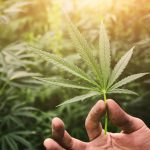 The increased prevalence and legalization of marijuana has made its effects appear innocuous. However, its use during sentinel moments of fetal and newborn development may be anything but innocuous. In fact, marijuana may block pregnancy by delaying implantation.

The literature is mixed. Certainly medical issues such as nausea and vomiting are stymied by marijuana use (the potential benefit). But what must be tallied is the benefit to the mother and the risk to the fetus.

These endocannabinoids play diverse roles in biologic systems. We have receptors on our cells naturally. They can have effects in the brain, at the musculoskeletal system and of course, in the uterus. It is known that receptor is expressed (present) differently in the endometrium. There is a higher concentration of the receptor at the time and place of implantation – suggesting that it may be involved in promoting and directing implantation. So, it is possible that the introduction of cannabis, cannabinnoids and their byproducts (Ie: THC and frank marijuana smoking) can alter implantation. It is possible that these products can lead to implantation delays and lengthen time to pregnancy.

If you have questions, please contact us for a free initial consult. We are here to help!