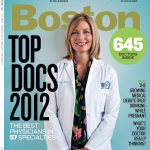 The Fertility Centers of New England is proud to announce that our own Dr. Robert Weiss has once again been named as one of the top Reproductive Endocrinologists in the Boston area by Boston Magazine. This is the third time Dr. Weiss has been selected for this honor. In a national survey, Dr. Weiss was selected as a “highly skilled and exceptional doctor” by his peers due to his caring and individualized care for each patient.

About Dr. Weiss
Dr. Weiss joined the Fertility Centers of New England in 2006 and has been practicing Reproductive Medicine and performing Reproductive Surgery for more than 20 years. He also serves as Director of Reproductive Medicine and Reproductive Surgery at Boston Medical Center and is on the faculty at Boston University School of Medicine. Dr. Weiss is an accomplished surgeon and has presented numerous papers in the United States and Europe. He has been named one of the “Best Doctors in America” for the last six years.

Dr. Weiss received his medical degree at Rutgers Medical School and completed his residency in Obstetrics and Gynecology at Brookdale Hospital, New York, NY. Dr. Weiss completed a fellowship in Reproductive Endocrinology at Brigham and Women’s Hospital and Harvard Medical School. He continues his academic affiliation at Boston University School of Medicine.

Dr. Weiss’ research and clinical interests are in the management of infertility and treatment of benign gynecological disorders, including endometriosis, uterine fibroids, and ovarian cysts. Dr. Weiss has recently taken an interest in Mind-Body techniques and is mindful of the psychological difficulty that infertility couples experience.

Dr. Weiss continues to see patients in our Massachusetts offices in Reading, Dedham and Westborough.