Cryopreservation: What is it? 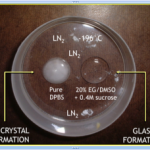 Cryopreservation (freezing) of embryos has been associated with IVF since its inception in the 1908’s.  The use of Frozen Embryo Transfer (FET) has resulted greater than 150,000 health births worldwide.  The availability of freezing viable human embryos is a necessary and desirable process.

Cryopreservation indirectly allows for the control of how many embryos can be transferred in the “fresh” cycle and put quality embryos into storage for a subsequent or future pregnancy attempts.

The standard method for freezing or the first three decades of IVF was the “slow freeze” method.  The principle of this technique was to control the temperature as it is lowered to provide control over the formation of ice crystals.  The change of water from liquid to ice results in an expansion of the molecule which is why the formation of ice is so destructive.  One need only look at frost heaves in the roads to see this expansion of ice and its destructive force.  If ice crystals form inside a cell they will destroy the cell.  The use of the slow freeze technique in embryo cryopreservation while successful did not yield results that were equal when compared with fresh transferred embryos.   Even in the early days of IVF there was a different freezing technique that existed called vitrification.  The term vitrification means a glass like state.  The concept of vitrification in cryopreservation represents a freezing method where the formation of ice crystals is avoided and therefore bypasses the destructive potential of the ice.  The reason vitrification was not utilized early on was the high chemical concentrations required to achieve it were too toxic to the embryo for it to be a viable option.

In the late 1990’s the possibility to vitrify human embryos became a possibility with the discovery that instead of using one toxic chemical you could put together different combinations.  These combinations would therefore decrease the relative toxicity of the cryoprotectants (chemicals) so they are in the same order of those used with the slow freeze methods.  The next hurdle was the combination of the solutions with the carrier, or device that one would hold the embryo(s) while in storage to provide a consistent and safe method to perform the vitrification and recover the embryos with high confidence.

At Fertility Centers of New England, we utilize the Vitrification Method that is associated with the most births worldwide.  Lead by Dr. Michael Tucker, we represent the most experienced Vitrification experts in New England.

For more information on egg freezing or frozen embryo transfer, contact us today!