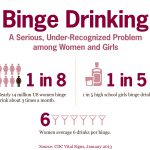 The Centers for Disease Control and prevention released their Mortality and Morbidity Weekly Report on Binge Drinking Among Women and High School Girls. The report announced that 1 in 8 adult women and 1 in 5 high school girls in the United States practice binge drinking (at least 5 drinks in a row), and tend to do so frequently (at least 3 times in a month). Binge drinking accounted for approximately half of the 23,000 alcohol-related deaths from 2001-2005, and was most common in women with household incomes greater than $75,000. While the incidence of binge drinking is higher in men, the report stressed greater concerns for binge drinking in women due to the increased risk of adverse reproductive health outcomes including unintended pregnancy, hormonal imbalances, infertility, pregnancy loss, and birth defects. While limiting the amount of alcohol consumption is prudent for all, women attempting pregnancy should have no more than one ounce per day and once pregnant should not drink at all.