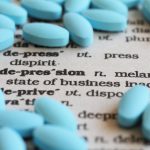 Women affected by depression and pregnant often find themselves pulled between concern for risks for the pregnancy vs their mental welfare. Antidepressants and pregnancy deliver a double-edge sword.

Women medicated with SSRIs (selective serotonin reuptake inhibitors) (such as Celexa, Lexapro and Prozac) may be more likely to have children who have higher risks of neonatal issues. These neonatal complications include jitteriness, mild respiratory distress and poorer muscle tone.

However, the most recent study of approximately 850,000 births in a Scandinavian study demonstrated that women exposed to SSRI’s were LESS likely to have preterm births and Caesarean section when compared to their counterparts who were diagnosed with depression but declined medications.

In fact, the Cesarean section rate was > 25% for unmediated, women with depression yet 17% in those women adequately mediated.

What is an expectant mother to do? Given the discrepancy of findings, concern for transient neonatal issues vs a significant increase in depression and post-partum depression, the answer may not be clear. Each case must be individualized taking into account both medical and psychiatric histories.  Recall, a healthy Mom is the cornerstone to a healthy pregnancy.