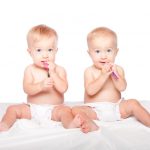 Multiple pregnancy (twins and higher-order multiples) is a major public concern. Each fetus presents an additional maternal physical burden which can translate into higher related morbidity and mortality rates for mother and babes alike. Historically, the increase in birth number has paralleled the increasing number of ART cycles performed worldwide.

To this end, reproductive endocrinologists and insurance organizations alike move toward the recommendation of elective single embryo transfer (eSET), when the embryonic conditions are favorable. However, until recently, there has been no updated assessment. Recently, Lemos et. Al. (reference cited below), performed a study of infants born between 2005-2010 to assay the additional healthcare costs imparted by multiple gestation pregnancies and births.

Of the approximately 450,000 deliveries, 97% were single births, 2.8% represented twins and 0.1% triplets or higher birth numbers. As anticipated, women who delivered twins or greater were more likely to have maternal co-morbities (for instance, diabetes, hypertension, preeclampsia, surgery and hospital stays). Eighty percent of twin gestations had Cesarean deliveries where 22% of singletons were delivered surgically. Twins and triplets were more likely to have NICU (neonatal intensive care unit) admissions that lasted twice as long as for singletons admitted to the NICU.

These greater expenses represent the comorbidities that exist for infant(s) and mother alike. It is paramount to safeguard the mother and child during both gestation and through birth. It is for this reason, that we continue to support elective single embryo transfer (eSET) during IVF cycles in women with favorable responses.