The Secretly Busy World of the Developing Fetus

The first pregnancy ultrasound is exciting but approached with much trepidation.  It may have taken months or years to come to this point.  Finally, the pregnancy was positive with pregnancy hormone levels rising appropriately.  However, quickly approaches the defining moment.  Without doubt, the uterus holds this incredible gift.

The uterus is unmistakable and the usual prominent shades of ultrasound greys become the background and the gestational sac takes center stage.  The fetus appears as a white blob.  At approximately 6-7 weeks of pregnancy, a heart flicker can be seen.

The images below are representations of the fetus in early gestation.  The second image is a rendering of the fetus at approximately 8 weeks.  The head is the prominent feature and arm buds and leg buds become more developed.  The umbilical cord is route for nourishment of the developing fetus and for waste disposal removing by-products and toxins to the maternal circulation. In the third image rendering, the actual size of the fetus is note.  It can be appreciated that in such a small package so many remarkable activities are occurring at break-neck speed.  In the focal image, development of the fetal fingers is noted.

To appreciate how intricate and amazing fetal development, here are some notables to ponder: 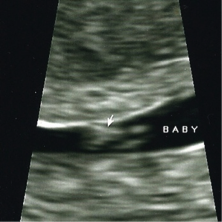 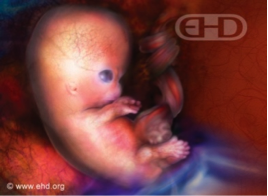 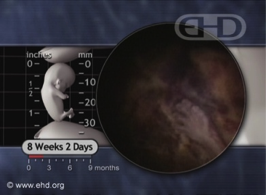 *Photos credited to The Endowment for Human Development. For more images and incredible videos, check out their website and click here.