The Potential Benefits of Assisted Hatching 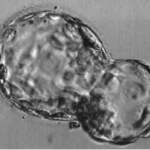 A previous blog on this site described the use of assisted hatching on frozen embryos.  As described, laser assisted hatching is a technique used to mechanically thin or vaporize a portion of the outer zona pellucida. This breach or thinning of the zona is done to aid the egress of the blastocyst from the outer shell to the endometrium.

What is the potential benefit of assisted hatching in a fresh IVF cycle?

In 2012, a detailed statistical analysis was performed on thirty-one separate assisted hatching studies (for a combined total of 5728 women).  When looking at the data as a whole, there was no significant difference in the odds of live birth in the assisted hatching group compared with the control group.  However, when analyzing only a subgroup owever, when of women with a previous failed IVF cycle, clinical pregnancy rates were improved in the women undergoing assisted hatching of their embryos.

An abstract from Washington University published this month (Fertility and Sterility 100(3),Supplement page S506 September 2013) and scheduled for presentation at the American Society for Reproductive Medicine in Boston this October additionally reported that assisted hatching may benefit young women with poor ovarian response.  This group previously reported no benefit of assisted hatching in women younger than 38 years old.  In this recent study, however, they performed a subgroup analysis again of young women but with a history of poor ovarian response to IVF stimulation.  In this study of 103 women, clinical pregnancy rates were higher when assisted hatching was performed.

The Practice Committee of the American Society for Reproductive Medicine in their published committee opinion recommends that “the available published evidence does not support the routine or universal application of assisted hatching in all IVF cycles at this time.  Assisted hatching may be clinically useful in patients with a poor prognosis, including those with ≥ 2 failed IVF cycles and poor embryo quality and older women ≥ 38 years of age”  At the Fertility Centers of New England, your physician can further guide you to see if assisted hatching my optimize your IVF outcome.