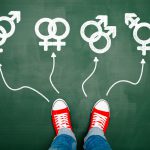 We are committed to helping create healthy families regardless of marital status or sexual orientation. We are often asked what are the reproductive choices for lesbian couples. In 1985, less than 1% of couples requesting therapeutic donor inseminations were lesbian couples. Thankfully, times have changed. Assisted reproductive technologies (ART) has been used by lesbian couples for years with increasing popularity. In many couples, one partner assumes the role of the genetic mother providing both the egg and pregnancy carriage. Other couples may choose to be genetic parent and carrier for the first pregnancy and the other partner chooses to do the same for subsequent children that the couple shares. Alternatively, the genetic mother may provide the egg to be fertilized by donor sperm and then transferred into the partner.

Recently, Carpinello et al. (Fertility and Sterility. Vol 106, No 7. 1709-1713) investigated intentions and outcomes of lesbian couple who presented for reproductive assistance. Approximately 20% of couples who inquired about conception did not pursue treatment. The study found that approximately 75% of couples planned on the genetic mother and carriage to be the same partner.  Just less than 25% of couples planned for each member of the couple to assume the same role.

Of the women who planned to both be genetic mothers and carriers, half of the couples actually pursued treatment. Although the percentage was smaller, the live birth rate was exceedingly high (80%). There are many factors that may contribute to these rates. Most of these couples lacked exposure to sperm and did not clearly demonstrate infertility. Secondly, the willingness of both partners to participate in conception allowed for optimization of the couple when compared to couples where one partner was the designate genetic mother.
Moving forward, education to the general population and to couple desiring fertility services is a must. There are many avenues and potential treatment algorithms available. Both intrauterine inseminations and IVF are efficacious strategies for family building.

If you have questions on family building option or how we can help you start your family, please contact us!