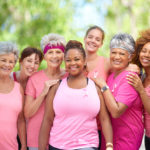 BRCA1 (BReast CAncer) and BRCA2 are human genes known as tumor suppressors. Harmful mutations of these genes can be linked to an increased risk of breast and ovarian cancer. In the United States, between one in 400 – 800 people in the general population carry a BRCA mutation. Individuals with Ashkenazi Jewish background have an increased incidence; 1 in 40 may be affected with a BRCA1 or BRCA2 mutation. There are many variations in BRCA genes and not all changes confer the same risks.  Some variants are harmless; others are known to be very harmful. For women trying to conceive, preimplantation genetic testing of embryos for BRCA mutation carriers is an option.

If you inherit a BRCA1 or BRCA2 harmful mutation, your lifetime risk of developing breast cancer is 60 to 80 percent, compared to about 13 percent in the general population. This translates to a five-fold increased risk for breast cancer.  If you have a harmful BRCA1 mutation, you have a 30 to 45 percent lifetime risk of developing ovarian cancer. Cancer risks by age are shown in the table below. Overall, it has been estimated that inherited BRCA1 and BRCA2 mutations account for 5 to 10 percent of the total breast cancers and 10 to 15 percent of the total ovarian cancers among white women in the United States.

Who Should Be Tested for BRCA Mutation?

Family history may indicate the need for testing. According to U.S. Preventive Services Task Force, the likelihood of a harmful BRCA mutation is increased when:

Patients diagnosed to be BRCA carriers are faced with complicated treatment decisions regarding both their own future risk of cancer as well as risk to their children. Some women are faced with the decision whether to proceed with surgically removing both breasts (mastectomies) and ovaries to reduce their cancer risks. If you are a carrier, your child has a 50% chance of inheriting the mutated BRCA gene. Male and female BRCA carriers may choose to proceed with genetic screening of their embryos (preimplantation genetic testing or PGT). PGT permits transfer of embryos that are less likely to carry the BRCA harmful mutations.

At Fertility Centers of New England, our goal is to optimize all aspects of a patient’s overall health in order to have the best possible chance of conceiving. If you have more questions preimplantation genetic testing of embryos for BRCA mutation carriers, please contact us today!

Can Cancer Genes Be Turned On Or Off?

Can cancer genes be turned on or off? In an interview for AARP Magazine by ‘Pop’ singer, Melissa Etheridge implied that genes for cancer (BRCA1 and BRCA2) can be turned…

Read more about Can Cancer Genes Be Turned On Or Off?
Children Conceived Through IVF Don't Show Any Increase Risk of Cancer

A recent large Dutch study confirmed what previous smaller studies had shown that children conceived through IVF don’t show any increase risk of cancer. This study followed nearly 50,000 children and…

Due to recent medical advances, a cancer diagnosis–although devastating–no longer means the loss of life or even ultimate fertility. Fertility preservation options should be considered when planning cancer treatment because…

Read more about Fertility Preservation for Patients with Cancer