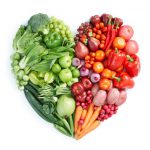 The United States Department of Agriculture jointly with the Department of Health and Human Services released their new dietary guidelines. For the first time in its history the new guidelines recommend that added sugar (not those found in milk or fruit) make up less than 10% of American’s diet. They also recommend that less than 10% of daily calories be from saturated fats including butter, whole milk, non-lean meat, and tropical oils such as coconut or palm oil. Eating less than 2,300 milligrams of sodium which amounts to one teaspoon of salt per day was also recommended. Most people consume much more than that. The average sodium intake is about 3,400 milligrams. Most of this excess sodium comes from eating processed food.

Eggs are now included in the recent guidelines as a very good source of protein. Coffee for the first time is also mentioned as long as it is consumed in moderation. Lean meats in moderation especially fish are also advocated.

We are all tempted by the food industry with their burgers, fries, pizzas, burritos, cookies, doughnuts, sodas, shakes, and other foods loaded with white flour, red and processed meat, salt, saturated fats, sugar, and preservatives. While they may taste good, sadly, they are not good for us.