Is Vaping Safer Than Smoking Cigarettes? 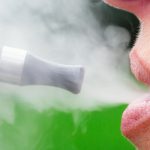 The Center for Disease Control recently recommended that all women who are pregnant discontinue the use of e-cigarette’s commonly known as vaping. Patients often ask “is vaping safer than smoking cigarettes?” Most vaping products contain nicotine which alone has been linked with adverse effects on a baby‘s brain development in the uterus. Other studies have linked products in e-cigarettes with cranium and facial defects. In addition, there are other additives that may be harmful to a developing child. Certainly as one contemplates attempting to conceive or is actively trying to conceive it’s very important to stop vaping.

Many women who are attempting to conceive or are pregnant believe that vaping is safer than smoking cigarettes but this is not necessarily true. A recent study from Iowa University found that the percentage of pregnant women who use e-cigarettes compared with those who are not pregnant was actually higher. Many women stop smoking cigarettes and begin vaping in the false belief that this may be less harmful to the them and the developing child.

Now, in addition to the known and unknown risks to the developing child, a newly described severe lung syndrome has been seen in men and women who have been vaping with THC products. Vaping THC products has been associated with an acute and deadly lung disease. As of August 27, 2019, 215 possible cases of severe lung disease associated with vaping have been reported to the CDC. Patients have presented with breathing difficulties, cough, and fatigue. Chest x-rays in most of these patients have shown severe damage to their lungs. Some patients have had severe respiratory difficulty leading to the need for surgical intervention and a number of these patients have died.

Vaping is not a better alternative to smoking cigarettes as it may have the same or worse effects on a developing baby. The long-term effects of vaping on a developing child or the mother are unknown. However, this disturbing new pulmonary disease which has led to hospitalization in acute care and even death makes vaping, especially with THC products, a very poor choice for someone who is attempting to conceive or is pregnant. Patients who are attempting to conceive should use all means to stop smoking including their use of e-cigarettes.

If you have questions, we can help. Please contact us to schedule an appointment or learn more.