FCNE’s Dr. Tucker to Be Honored at RESOLVE’S Night of Hope 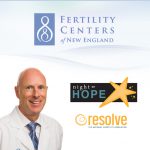 The Fertility Centers of New England and RESOLVE: The National Infertility Association are pleased to announce that Dr. Michael John Tucker, BSc Comb Hons, Ph.D., FIBiol, HCLD, embryologist, is being awarded the Hope Award for Advocacy for his many years of advocacy for infertility patient rights and access to care, testifying before the Georgia state legislature, and serving as an expert on issues including Personhood.

Dr. Tucker will accept the award at RESOLVE’s Night of Hope Gala on November 18, 2014 at the Lighthouse at Chelsea Piers in New York City. As the organization that supports and provides a voice for people diagnosed with infertility, RESOLVE established the Hope Awards to recognize professionals, companies, volunteers, and the media who have demonstrated leadership in the infertility field or have made a positive impact in the lives of people struggling with infertility.

“It’s such an honor to receive RESOLVE’S Hope Award for Advocacy,” said Dr. Tucker. “At FCNE, we believe that every individual deserves fair access to infertility care. This recognition is a testament to our commitment to and expertise in reproductive rights issues.”

Using his expertise as an embryologist, Dr. Tucker has been able to inform and educate lawmakers in a number of states on legislation that has been key to the infertility community. He has also served as a speaker at RESOLVE educational events for many years. Dr. Tucker received his bachelor’s degree in zoology & physiology from the University of London, and his doctorate in reproductive physiology from the University of Birmingham in the UK.

In 1997 he received recognition as a Fellow of the Royal Institute of Biology in England (now the Society of Biology). As a certified laboratory director he has worked in the field of clinical embryology on four continents for over 30 years, spending the majority of the last two decades in the US. During this time Dr. Tucker has received worldwide recognition for his pioneering work in the IVF technologies that have helped to revolutionize the treatment of infertility.

In 1992, he helped to advance the ICSI technique and was responsible for the first “ICSI babies” born in the US. In 1997, he led the team that was successful in achieving the first ever pregnancies and births using cryopreserved donor & immature oocytes.

“RESOLVE is delighted to recognize Dr. Tucker for his commitment to the infertility community,” said Barbara Collura, RESOLVE’s President/CEO. “The Night of Hope is a special opportunity to come together and thank all those who work tirelessly to improve the lives of the 7.3 million women and men in the U.S. facing infertility.”