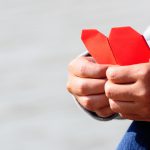 Vaginal bleeding during early pregnancy is a common but frightening experience.  Approximately 25% of women will experience vaginal bleeding during the first trimester of pregnancy. This can result in an inevitable pregnancy loss or be a sign of an ectopic or even molar pregnancy. However, the majority, over 80% will go on to have a successful pregnancy outcome. The risk of a poor or favorable outcome for a first trimester pregnancy can be known within a week using transvaginal ultrasound and beta hCG titers.

Typically, beta hCG levels increase by at least 50% every 48 hours during the first trimester. Failure to see this increase or to have an empty uterus by transabdominal ultrasound with a titer >6000 mIU or by transvaginal ultrasound to have a titer >2000 mIU is suggestive of an abnormal pregnancy.

If vaginal bleeding occurs in early pregnancy in women who are Rh negative, RhoGAM should be given. Unfortunately, progesterone supplementation, baby aspirin, bed rest or any other intervention have not been shown to reduce the risk of ultimate loss.

The prognosis for most women experiencing vaginal bleeding in early pregnancy is generally good with over 80% having a successful pregnancy.